The Wreck of the Mayflower 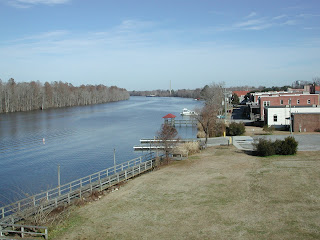 Hi. Thanks for stopping by Drye Goods.

The photo above shows the Roanoke River and downtown Plymouth. It'll give you some idea of the setting for the story that follows this intro.

One of my goals for this blog is to post stories about the fascinating history of Washington County and northeastern North Carolina.

I'm going to lead off with a story I dug up for the Roanoke River Lighthouse and Maritime Museum here in Plymouth. It's based on documents from the National Archives in Washington, D.C., the North Carolina Collection at the University of North Carolina, and microfilm of the Roanoke Beacon. It took place at this time of year more than a century ago . . .


It was early summer 1899 in Plymouth, and when people got together in the warm, humid evenings for homemade ice cream, two topics dominated the conversations – mosquitoes and barbecue. The mosquitoes were especially bad that summer. But people were still raving about the barbecue that Enoch Weaver had cooked a couple of weeks earlier at the Washington County centennial celebration.

Some of the town’s young men were hard at work converting a vacant lot into a baseball diamond at the corner of Water and Adams streets. And with a new century on the horizon, the editor of Plymouth’s newspaper, the Roanoke Beacon, was insisting that the time had come for the town to install electric lights.

The town’s waterfront on the Roanoke River was bustling with activity as steamers and schooners came and went. Dockworkers also loaded canal barges with goods, and the barges were towed down the Roanoke, across the Albemarle Sound, and up the Dismal Swamp Canal to the deepwater harbor at Norfolk, Virginia.

The raspy moan of the steamer Mayflower’s whistle was a familiar sound down at the docks. The steamboat was a fixture on the Roanoke and Cashie rivers, and had been hauling passengers, mail and freight between Plymouth and Windsor for five years.

Around four o’clock on the afternoon of Friday, June 30, 1899, the Mayflower’s eight deckhands hauled in the lines that had held the riverboat to the Plymouth docks, and the steamer eased away from the wharf and nosed into the current of the Roanoke.

On that long-ago summer afternoon, the riverboat was hauling hay bales and plaster to Windsor. There also were nine passengers making the trip, including a young couple named Russell and their infant child.

The Mayflower’s captain signed his name “H. Davenport,” and he’d been at the steamer’s helm for a little more than a year. But this was his last run. A man named Hayes, who was in the pilothouse with him as the Mayflower chugged up the muddy, brown Roanoke, was replacing him.

Davenport took the steamer about five miles upriver until he reached a narrow, deep creek that snaked through a mile or so of cypress swamp and linked the Roanoke and Cashie rivers. The creek was known as The Thoroughfare.

Davenport would have to execute a series of back-and-forth turns to guide the riverboat through the twisting waterway to the Cashie River. There, he would make a left turn into the Cashie’s darker, tannin-stained waters for the rest of the trip to Windsor.

Getting a steamboat through The Thoroughfare was tricky. The stream is one of the most crooked stretches of water in the area, and any riverboat captain would tell you that any turn in a stream is dangerous.

A riverboat couldn’t be stopped on a dime, so you could collide with another boat coming the other way that you didn’t see until it rounded the bend. Or your cargo could shift during the turn, causing the boat to list or, if you were really unlucky, capsize.

Davenport also had to make a transistion from steaming into the current in the Roanoke to having the current suddenly behind him in The Thoroughfare. That would make it more difficult to control the speed of the Mayflower, and too much speed could cause problems going around a bend.

The Mayflower made the first turn with no problem, but something happened as the steamboat went into the second turn. Davenport and Hayes could feel the deck tilting beneath their feet. Davenport called for more power from the engine room and tried to steer the Mayflower into shallow water to ground it before it capsized.

But he didn’t make it. The top-heavy, round-bottomed steamboat rolled over and sank in 20 feet of water.

There were 17 people on the Mayflower when it went down. But only 16 escaped. Somehow, the infant was torn from Mrs. Russell’s arms as the steamer overturned. The child’s body was found a week later when salvagers raised the Mayflower.

Davenport said later that he thought the plaster in the Mayflower’s hold had shifted during the turn and caused the steamboat to capsize. It’s possible that having the current behind the Mayflower caused it to go into the turn too fast and that could have caused the plaster to shift.

Maybe a swell lifted one side of the steamboat as it rounded the bend and started the plaster rolling toward the other side of the hull. Or maybe Davenport just misjudged his steamer's speed.

The Mayflower was towed to nearby Edenton for repairs, and was again making the Plymouth-to-Windsor run by July 21.

The Mayflower’s former captain, however, took longer to recover. The July 7, 1899 edition of the Roanoke Beacon reported that Davenport had gone to a hospital in Norfolk for “medical treatment,” and would spend some time in the Virginia mountains.
at 10:54 AM No comments: 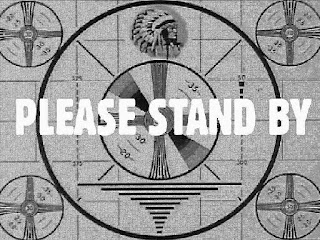 We'll have this thing up and running soon. Thanks for stopping by.
at 10:33 AM 3 comments: