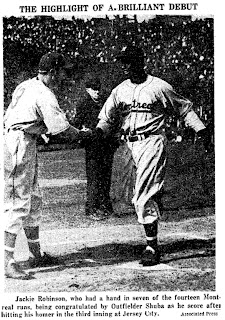 Jackie Robinson had quite a day when his Montreal Royals went to New Jersey to open the 1946 International League season against the Jersey City Giants before a sellout crowd of 25,000 fans in Roosevelt Stadium.

Robinson, playing his first game as a member of the Brooklyn Dodgers’ Class AAA farm team, banged out four hits in five trips to the plate, including a three-run home run in the third inning. Montreal pounded Jersey City 14-1.

Robinson’s debut with the Royals had a much greater significance than his impressive performance on the field, however. Roosevelt Stadium became the site of the first regular-season game in which an African-American player took the field as a member of a previously all-white professional baseball team. That was huge news in 1946, when the U.S. was essentially a segregated society.

Robinson became the first black player in the Major Leagues the following year when he was promoted to Brooklyn. He was named the National League Rookie of the Year in 1947 and played 10 seasons with the Dodgers. Robinson was inducted into baseball’s Hall of Fame in 1962.

But Robinson made a contribution to our nation that went far beyond the statistics he compiled as a player. His Major League career broke through the wall of segregation and became a milestone in the civil rights movement. So Robinson’s presence in that nearly forgotten game 63 years ago makes Roosevelt Stadium a legitimate historical landmark just as much as the Woolworth’s lunch counter in downtown Greensboro, North Carolina became a landmark after the 1960 sit-ins protesting the store’s refusal to serve black customers. 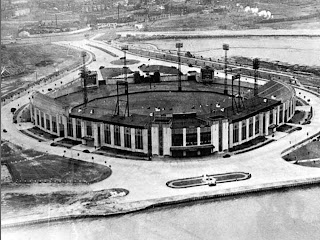 That Woolworth’s lunch counter is now in the Smithsonian Institution. But Roosevelt Stadium is long gone and all but forgotten. When my brother-in-law Bob Morrow, my nephew John Morrow and I went on our third annual post-Christmas search for ballparks of yesteryear, we found only a few scant reminders of the old stadium.

During the past two Decembers, John, Bob and I have visited the sites of Ebbets Field in Brooklyn and the Polo Grounds in Manhattan. The Ebbets Field trek was posted on Jeff Houck’s lively blog, SideSalad, and can be seen at http://sidesalad.net/archives/003056.html.

You can see the story of last year's visit to the Polo Grounds in the Drye Goods entry of January 5, 2008. Each time, I shot a photo of John standing in front of a marker denoting the sites of the stadiums.

I think we’ve discovered a definite trend about what happens to old baseball parks. Like Ebbets Field and the Polo Grounds, Roosevelt Stadium is now multi-family housing. Unlike the sites of the old New York ballparks, however, there’s no public marker designating the spot where Jackie Robinson started changing the world. Or if there is, the public can’t see it. What once was Roosevelt Stadium is now a gated community called Society Hill. 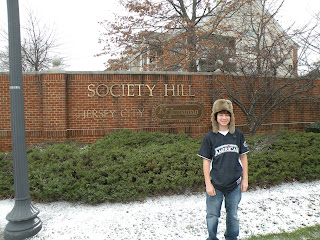 The guard at the Society Hill gatehouse told us that a stadium had once been there but we couldn’t enter. So instead of the usual picture of John standing in front of a marker, I got a shot of him standing in front of the wall that separates Society Hill from the rest of the world. As near as I can figure, the stadium’s centerfield wall would have been maybe 300 feet behind John, and home plate would have been 700 feet or so from where he’s standing.

The Associated Press photo at the top of this entry shows teammate George Shuba greeting Robinson as he touches home plate after his home run. In those days before high-fives and fist bumps, a handshake was the standard post-home-run greeting of congratulation.

Sixty years after that handshake, New York Times writer George Anderson wrote about the importance of the moment when, for the first time, a white player congratulated a black teammate for hitting a home run. For Shuba, the gesture was automatic.

“Our teammate hit a home run so I shook his hand,” Shuba told Anderson in the 2006 Times story. “It didn’t make any difference to me that Jack was black. I was glad to have him on our team.”

Anderson also reported that Shuba had had a framed copy of that photo hanging in his living room for 40 years.

We found a copy of that AP photo in a Capital One Bank at the Stadium Plaza shopping center near Society Hill. The photo is one of several large pictures of Roosevelt Stadium displayed in the bank’s lobby. But the bank manager wouldn’t let me take shots of those photos without getting permission from her boss, and we didn’t have time to wait for that.

The only other reminder of the ballpark we found was Stadium Pizza, a restaurant in the shopping center.

Roosevelt Stadium was built on an arrowhead-shaped peninsula known as Droyer’s Point that juts into Newark Bay. The ballpark was part of President Franklin D. Roosevelt’s Works Progress Administration program that was intended to put Americans back to work during the depths of the Great Depression of the 1930s. It was designed by architect Christian Ziegler and was considered a prime example of Depression-era Art Deco architecture.

When the stadium opened in 1937, Jersey City Mayor Frank “I am the law” Hague decreed that it would be named Roosevelt Stadium in honor of the president. John P. Gallagher, who was a boy at the time, wrote in a 1984 letter to the editor of the New York Times that “Roosevelt Stadium was our sports palace, playground and pride.” It became one of minor league baseball’s premier ballparks. In addition to hosting the game in which Robinson broke baseball’s racial barrier, the stadium was the site of 14 Brooklyn Dodgers’ home games in 1956 and 1957.

After the 1957 season, the Dodgers announced they were moving to Los Angeles. Jersey City officials scrambled to keep Major League baseball in Roosevelt Stadium, trying to persuade the Pittsburgh Pirates, Philadelphia Phillies and Cincinnati Reds to play some of their home games there. But all three teams refused the offer.

The New York Giants of the National Football League played a few exhibition games at the stadium in the early 1960s, and it was used for minor league baseball off and on until 1978, when it was abandoned. By the mid-1980s, Roosevelt Stadium had fallen into serious disrepair.

In 1984, the decaying ballpark was torn down. In his Times letter, John P. Gallagher lamented the destruction of his boyhood memory and had strong criticism for the forces that allowed the stadium to be demolished.

“Yet in our hearts we'll wonder what kind of a society we live in that has so little respect for tradition and destroys the structures that house them . . . .,” Gallagher wrote.
at 11:44 PM 8 comments: