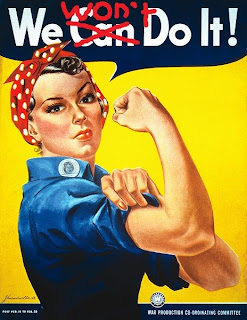 We're in a war against some dangerous people who are willing to use any means they can come up with to kill as many people as possible. But it seems that we're thrusting our heads deeper and deeper into the sand to avoid confronting this reality.

The latest -- and maybe the most disturbing -- example of this refusal to acknowledge reality is being played out today in many airports where controversial new search techniques are being used by the Transportation Safety Administration to screen airline passengers before they board airplanes.

News reports say that the new security measures, which had been planned for some time, were implemented when an Al Qaida plot was uncovered last month to ship bombs aboard cargo airplanes and explode the bombs over the U.S. Airline passengers now have the option of either going through a new full-body scanner or being hand searched by a TSA officer.

MSNBC describes the search as an "open-palmed pat-down that many travelers, and even some security officers, feel is too personally invasive." Passengers can avoid the search by going through the full-body scanner. The scanner displays a nearly nude image of a passenger to a TSA officer who is out of the public view.

So, one way or the other, airline passengers are being required to submit to something that is seriously discomforting. Still, the Los Angeles Times reported recently that the TSA said that 28 million people boarded passenger planes during the first two weeks of the new security procedure, and only one percent of those passengers declined to go through the scanner and had to undergo the hands-on body search.

The Times reported that TSA said it received fewer than 700 complaints about the hands-on searches. That's a tiny proportion of the millions of people who had to undergo security checks before boarding airplanes.

It's easy to understand the annoyance of passengers who have to undergo these new search procedures. It is unsettling and humiliating to have your privates groped or displayed on a screen. But there is this war going on, and we are continually reminded of how fiercely our enemies hate us and how intensely they want to kill us, preferably in large, spectacular numbers. They would love nothing better than to explode a passenger airplane crammed with Americans over a large city so that chunks of flaming wreckage and body parts rained down on horrified witnesses who would then blame the government for not preventing this tragedy.

So it's hard for me to understand the mentality of those who are the loudest in protesting the increased scrutiny. And it's also baffling to me that the complaints of such a small group could explode into the broiling scandal that has erupted in the past few days.

In the December issue of Vanity Fair, editor Graydon Carter notes that Americans seem to be "full of inchoate rage, and . . . constantly throwing fits and tantrums". Carter published his comments weeks before the latest outrage. And our enemies are playing this anger like an instrument.

I've long been fascinated by the history of World War II. As I've gotten older, I've realized how propaganda was used to shape public opinion and persuade people to get with the program. And propaganda always makes me uneasy because it's used to emphasize one point of view and diminish or conceal other points of view. So when I see a poster like the one above that I've altered for this post, I also realize that the same techniques were being used by the Allies and their enemies.

I can't help but compare that era to today. However misleading the propaganda images from that time may have been, it's clear that people were willing to put up with much more danger and inconvenience than we are now. For example, beginning in September 1940 and continuing for months, Nazi Germany bombed London and other British cities every night. By May 1941, about 43,000 civillians had been killed in the attacks that came to be known as the Blitz. That means that far more people were killed every month during the Blitz than were killed in the attacks on New York on September 11, 2001.

But as Carter noted in his Vanity Fair column, a poll taken at the time showed that the British were more upset by food rationing than they were by the constant bombing. They simply were determined to carry on in the face of Hitler's savage onslaught.

What we're being asked to put up with isn't even on the same scale as what Londoners endured during the Blitz. But my god, how we're complaining. And how gratifying this must be to the thugs who are determined to kill us.
at 7:23 PM 3 comments: