A makeover for the dear old DAP 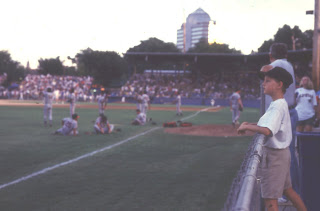 I hear that an old friend is getting a badly needed facelift. The venerable Durham Athletic Park in downtown Durham, North Carolina is being restored to something resembling its appearance when it was built in the late 1930s.

From what I saw the last time I visited the park a few years ago with my old pal, Alan Snel, it really needed work. I’d been telling Al for years what a great place the DAP was, so cozy and picturesque and the perfect place to watch a baseball game. (By the way, visit Al’s Blog, “Bike Stories,” at http://alansnel.blogspot.com/.)

I was astonished and dismayed by what I saw. Huge bare spots in the outfield grass. Outfield fences in disrepair. Peeling paint. A general air of neglect and abandonment.

But back in the day, when I was going to the DAP as often as two or three times a week, it was maintained meticulously. I spent many summer evenings at the DAP between 1980 and 1991 when I was living in nearby Chapel Hill. In those days, the Durham Bulls played their home games there against their Class A Carolina League opponents. 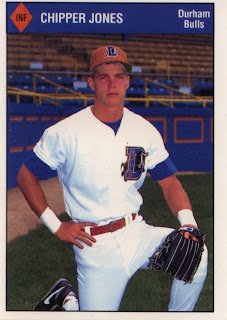 The Bulls were a farm team of the Atlanta Braves, and I saw players who, in the 1990s, would form the heart of the Braves starting lineup. Ron Gant, Ryan Klesko, Javy Lopez, Jeff Blauser, Mark Lemke, Andruw Jones, Dave Justice, Steve Avery, and possible Hall of Famer Chipper Jones spent a summer in Durham on their way to the big time.

Some of the earliest dates I had with Jane, who is now my wife, were going to Bulls’ games. It was there during one game that Jane told me that her mom had gone to high school with “some guy” who’d later become a famous baseball player. I remembered that her mom grew up in Fargo, North Dakota. A light went off in my head. “Your mom knew Roger Maris?” I asked in astonishment. “Yeah, that name sounds right,” Jane said.

Durham and the nearby cities – Chapel Hill, Cary, Hillsborough and Raleigh – loved the Bulls and kept the turnstiles spinning. The Bulls always were at or near the top in minor league attendance.

And the DAP was every bit as beloved as such baseball icons as Fenway Park or Wrigley Field or the lost and lamented Ebbets Field. It was well-worn but cozy, tucked into downtown Durham amid redbrick tobacco warehouses. It was the perfection of Depression-era minimalism, built as a WPA project in 1939 for $100,000.

The beer was cheap, cold and plentiful, you could make a meal out of a Bull City burrito, and life was good. Then, in 1988, Kevin Costner, Susan Sarandon, Tim Robbins and That Damned Movie came along.

The movie was “Bull Durham,” a tale about minor league baseball that was filmed in Durham. Costner plays a cynical, wizened catcher brought to Durham to prepare Robbins’ character – supposedly a flame-throwing pitcher – for the Major Leagues. Sarandon plays the love interest for both men. 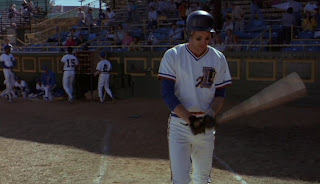 Durham Athletic Park became like another character in the movie. And the DAP became a star.

The movie was a huge hit, something of a cultural phenomenon. Durham Bulls baseball caps started appearing everywhere. I remember seeing a close-up of some celebrity wearing a Bulls cap at the Major League All Star game in July 1988, about a month after the movie was released.

And the tourists started pouring into Durham. They were coming from everywhere – software salesmen from Silicon Valley pitching their goods at nearby Research Triangle Park, families from places like Toledo and Rochester visiting relatives in the area, more Duke students than anyone should have to put up with, even businessmen simply passing through or near Durham on their way to somewhere else. All of them stopping to catch a game at the DAP because they’d seen That Damned Movie.

The beer lines got longer and the crowds became ruder. Those of us who’d been coming to games for years felt like something had been taken away from us. And to top it off, many of the tourists didn’t know anything about baseball. One night I actually heard a woman ask her companion, “Which one is first base?”

But all of this put Durham on the map and added some new life – and cash – to the city’s downtown. And all the attention stirred the city’s ambitions. City leaders decided they needed a spiffy designer stadium. They brought in HOK Sport, the same firm that designed Baltimore’s Camden Yards, to draw up plans for the new ballpark.

The Bulls played their last season at Durham Athletic Park in 1994, and moved into their shiny new cross-town pasture the following summer. The city, undoubtedly trying to push every brand-familiarity button it could find, gave the new stadium the cumbersome name of Durham Bulls Athletic Park.

I have to admit, I liked the new stadium more than I wanted to. The park is handsome, and it’s a nice setting for a baseball game, with a nice vista of downtown Durham. But the Bulls have gone upscale corporate since former owner Miles Wolfe sold the team to Jim Goodmon, owner of Capitol Broadcasting Company of Raleigh. New condos priced well out of reach of most of the people who faithfully attended Bulls’ games at Durham Athletic Park are going up around the new stadium. The Bulls are now a Class AAA team playing in the International League, one notch below the Major Leagues.

The new stadium even has that ultimate appeal to contemporary snobbery – skyboxes.

The old DAP fell into shameful disrepair after the Bulls left. Al must have thought I was nuts when I brought him to the ballpark he’d heard me raving about for years, and he sees this tumbledown old dump.

So I’m glad Durham Athletic Park is being restored. Latest word is that Minor League Baseball will use the DAP as a training academy where baseball executives can learn the business of running a team. A company that specializes in maintaining sports stadiums will take care of groundskeeping and use the DAP to train its employees. There’s talk of opening a museum of minor league baseball at or near the ballpark. And North Carolina Central University’s baseball team will play its home games there.

So the DAP will go back to its origins as a baseball training ground, and a landmark will be preserved. Everybody happy, right?

Well, not exactly. Call me a curmudgeon, but I think it was better in the old days before the influence of money, fame and Hollywood changed the face of Durham baseball.

And by the way, I shot the photo at the top of this entry at the DAP in 1993. The photo of Kevin Costner with a baseball bat is from That Damned Movie.
at 4:38 PM

Great story Willie...your wife's mom knew Roger Maris...so did I. I graduated from Fargo Central High in 1950...played football with Roger and his brother Rudy. Was Jane's mom of my generation and if so what was her name then? Mine was, and remains, Kent Sherwood...