Crudity vs. Cleverness at Hockey Games 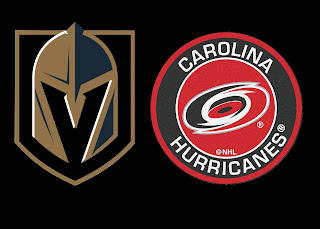 I wrote about last Sunday's Vegas Golden Knights-Carolina Hurricanes game for LVsportsbiz.com. Sitting in the press box high above it all, I noticed a decided difference in crowd behavior from what I've seen at New Jersey Devils' games.


We've been to many New Jersey Devils' games, which are played in the Prudential Center (aka "The Rock") in downtown Newark. We sat in the cheap seats up near the rafters only once, and we won't do it again.

From what I've seen of Devils fans in the nosebleed sections, they tend to be loud, obnoxious, often drunk, and profane. Resolutely profane. Their favorite cheer seems to involve some variation of this phrase: "(Noun), (pronoun) suck!" That's about it, as far as I've heard after attending more than half-a-dozen games there. They also are fond of shouting in loud unison, "Rangers suck!" Even if they're playing, say, Montreal or Philadelphia.


Anyway, the press box at PNC Arena is actually looking down on the cheap seats there. Sunday night the section closest to the end of the press box where I was was filled with a bunch of guys, most of them middle-aged 30s-40s-50s as far as I could tell, who all seemed to know each other. I'm guessing that they all work in the same office, bought tickets together, and attend a lot of Canes games.

These guys were loud, and made noise throughout the game. Their chief cheerleader was a beefy, bespectacled guy with an old-fashioned flattop haircut who sat in the center seat in the section's front row. Sometimes this guy just sort of yelled, no words, growling loudly. Then he'd come up with a chant of some kind and start yelling that, and all the other guys would join in and chant it loudly for a little while.

The Canes basically got their clocks cleaned Sunday night, losing 5-1 to Vegas. But the guys in this section never tuned out the game, despite the one-sided score. They yelled encouragement and sometimes sardonic advice throughout. But they were getting more and more sarcastic as the game progressed and the Canes fell further behind.

His pals picket it up and started chanting it, then some of the sections around them picked it up, and pretty soon maybe a few hundred Canes' fans in that end of the arena were chanting "Please do bet-ter! Please do bet-ter!" You had to be there to get the full effect (it really was funny), and you had to have been in a sewer-mouthed crowd like the cheap seats at a Devils' game to appreciate the contrast between the crowds in Newark and those in Raleigh. Crudity vs. cleverness. I hope the Canes succeed in returning the crowds to PNC Arena. It really is a lot of fun.
at 1:35 PM

Fortis is committed to providing the most comprehensive and convenient range of specialist services, such as blood, urine and hair tests for patients in the UK. If you want to get more interesting details about dermatology billing services, visit this site right here.